You may be among a growing number of Illinois parents who have heard of the 2013 Illinois Early Learning and Development Standards and Benchmarks (IELDS). Like many other parents, you may have questions about the IELDS. You may want to know how the IELDS might affect your preschooler’s education. You might also wonder what families can do at home that might help children meet the IELDS.

What are the 2013 Illinois Early Learning and Development Standards?

The Illinois Early Learning and Development Standards (IELDS) are designed to help teachers and caregivers plan educational experiences for young children that will help them be ready for kindergarten. The standards are broad statements that provide teachers with reasonable expectations for children’s development in the preschool years. A benchmark is a step on the way to meeting a goal appropriate for a particular age group. The benchmarks are essentially a list of things most young children should be able to learn, know, and do before they start kindergarten.

The Illinois State Board of Education developed the IELDS with the cooperation of many early childhood educators and experts throughout Illinois. The IELDS are aligned with the Illinois Kindergarten Standards and the Common Core State Standards for Kindergarten.

The Illinois Early Learning and Development Standards  are also available in Spanish.

Why do we need standards for children who aren’t even in kindergarten yet?

There are several reasons for creating the IELDS:

The IELDS give teachers and caregivers a way to think about what each child can already do and what they may need to learn to do to expand their knowledge and skills. For example, does Sam look at the pile of pennies and say, “One, two, seven, five,” or does he touch one coin at a time and meaningfully count each penny, “One, two, three”?

How are the 2013 Illinois Early Learning and Development Standards organized?

Here is what a section of the 2013 IELDS looks like.

1.A Demonstrate understanding through age-appropriate responses.

Here is how to read that section of the IELDS:

Can parents use the standards and benchmarks?

As a parent, you might use the 2013 IELDS in several ways. For example, reading the benchmarks can give you an idea of the kinds of skills and experiences that kindergarten teachers would like every child, including yours, to have before entering kindergarten. You can also find out whether your child’s program uses the IELDS. If it does, you might ask the teacher which benchmarks your child is working on. The teacher will be able to tell you how the classroom activities help the children meet benchmarks.

Families can also work together with early childhood programs to provide learning experiences for their children. So, you might use the 2013 IELDS to help you think of things to do at home that might give your child the skills and knowledge he or she will need for kindergarten.

Your child is probably doing things every day that show he or she is meeting some of the benchmarks. For example, an ordinary trip to the grocery store may reveal your child’s progress toward achieving several benchmarks in different learning areas:

Keep in mind that your child grows and learns at his or her own pace. Children will meet 2013 Illinois Early Learning and Development benchmarks at different times. Even within your family, your children will probably not meet every benchmark at the same age.

How will the 2013 Illinois Early Learning and Development Standards affect my child?

Does your child attend a program that receives Early Childhood Block Grant funding? By law, its comprehensive services must be aligned with the IELDS. Some curricula used in early care and education settings have been aligned to the IELDS (see ExceleRate Illinois).

A wide range of experiences and activities can be used to help children achieve the benchmarks. For example, a preschool teacher would want to provide classroom experiences that help children notice the differences between letters and numbers (Benchmark 4.A.ECf). The teacher might make name tags for children’s cubbies so they can begin to see what letters are in their names. She might make sure to include a set of toy road signs in the block corner and place a 0–10 number chart on the wall where children can easily see and comment on it.

What are some important things to know about the 2013 Illinois Early Learning and Development Standards?

The IELDS allow for a balance of child-initiated and teacher-initiated learning experiences. They take into account the fact that children develop at different rates.

The IELDS were field tested in many classrooms throughout the state before the Illinois State Board of Education adopted them.

Many preschool activities address more than one benchmark at a time. Teachers do not need to come up with a separate activity for each benchmark. For example, when Tamika’s class studied turtles, Tamika met some science and arts benchmarks by observing a box turtle and making sketches of it. Tamika also met language arts benchmarks when she told her classmates about what happened when she fed a worm to the turtle. Some kinds of play also enable children to meet more than one benchmark at a time. After Tamika’s class took the turtle to a veterinarian for a check-up, several children worked together to build a pet hospital using blocks and toy animals. They also took turns acting as the doctors and pet owners. When doing all this, they were meeting benchmarks in social studies and social/emotional development.

How will a teacher know if my child is meeting the 2013 IELDS benchmarks?

A teacher may be able to tell whether a child has met some of the benchmarks simply by watching or talking to the child. For instance, if Sarah is able to express ideas using paints, pencils, and clay, her teacher will know that she meets one of the arts benchmarks.

If you visit a program that uses the 2013 Illinois Early Learning and Development Standards, you might see the benchmarks posted in the hallway, the office, or the classrooms. The teachers will probably collect children’s work that shows they are meeting benchmarks. A teacher might keep a folder for each child so parents can see during conferences how their children are doing in school.

For example, to show 3½-year-old Amaya’s parents what their daughter is learning about language arts, the teacher hands them some samples of Amaya’s work. One item is a folded page covered with scribbles and two backward “E”s that Amaya called “My Newspaper.” Another is a photograph of Amaya holding a book open, turning pages while telling the story to her friend. The teacher explains that the “newspaper” shows that Amaya experiments with writing materials (Benchmark 5.A.ECa) and that she is beginning to “write” by making scribbles and trying to form letters herself (Benchmark 5.A.ECb). The photograph shows that Amaya understands how to use books (Benchmark 2.A.ECa). Together, the two samples show that Amaya interacts with a variety of texts or written work, such as her “newspaper” and a storybook (Benchmark 2.C.ECa).

Just because a program uses the Illinois Early Learning and Development Standards does not mean that your child will have standardized tests in preschool. As the overall IELDS document notes, “The IELDS are NOT intended to be a curriculum or assessment tool and are not an exhaustive resource or checklist for children’s development.” 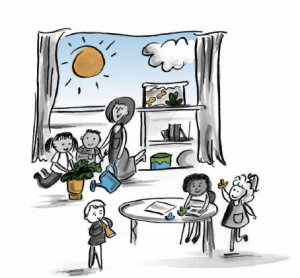