Dual Language Learners (DLLs) are children who are learning two (or more) languages at the same time. The term is also used to describe children who are learning a second language while continuing to learn their first, or home, language (Office of Head Start, 2008). DLLs tend to achieve varying levels of skill in both languages, ranging from limited use of one or both languages to “balanced bilingualism,” meaning fluency in both languages. The goal for DLLs in the early years is age-appropriate, balanced bilingualism (Castro, Ayankoya, & Kasprzak, 2011).

The term DLL is used by Head Start. Head Start sees it as a positive term that shows respect for the child’s home language. DLL is often used in place of several older terms, including Limited English Proficient (LEP), English Language Learner (ELL), and Languages Other than English (LOTE). Head Start believes that it is particularly suitable for preschool-age children and that it is more culturally sensitive than the other terms (Office of Head Start, 2008).

Why should we be concerned about DLLs?

In 2008, about 26% of children enrolled in Head Start programs spoke Spanish and were classified as DLLs (United States Head Start by the numbers 2008 PIR profile, 2009). The percentage of 4-year-old Latino children in PreK classrooms grew from 43% in 1997 to 53% in 2007 (U.S. Census Bureau, 2007). It is important to note that other immigrant populations with young children are also growing. About 140 languages are spoken in the 84% of Head Start programs that serve children who speak two or more languages (Severns, 2010). Because children who are DLLs constitute a diverse and growing proportion of K-12 students, their educational success is critical to the overall effectiveness of our educational system (Espinosa, 2010; Hammer, 2009).

Illinois is unique in its response to the growing number of DLLs in PreK. Under Illinois law, schools must offer a bilingual classroom to K-12 students when at least 20 students share a native language other than English (Illinois Administrative Code 228: Transitional Bilingual Education, 2010). New rules from the Illinois State Board of Education (2010) extend this requirement to preschool-age children in any program administered by a school district, regardless of whether the program is provided in an attendance center or a non-school-based facility. In 2008, 13,782 children were enrolled in bilingual preschool classes in public schools (up from 828 students 10 years earlier), and the number of bilingual preschool classes is likely to grow under the new rules (Malone, 2010).

With approval of the new rules, Illinois became the first state to mandate that public schools with preschool programs offer bilingual education to 3- and 4-year-olds who do not speak English (Malone, 2010). Under the new regulations, school officials must determine whether students speak another language at home and measure how well they speak and understand English (using local criteria). If a child meets the criteria and at least 20 students share the same language, the child must be offered a transitional bilingual education preschool class that will provide instruction in basic academic skills in his or her native language as he or she learns English (ISBE, 2010). If there are 19 or fewer preschool DLL students who speak the same language in a public school district attendance center, then a locally determined transitional program of instruction, usually including English as a Second Language (ESL) and home language support, is to be provided for those DLL students. This mandate currently applies to the nearly 600 preschool programs funded by public school districts (Malone, 2010).

The new regulations also require that by 2014 lead teachers in bilingual preschool classes be certified in bilingual instruction or in English as a second language, as well as in early childhood education. The number of early childhood educators who already have both these certifications is currently not enough to meet the demand statewide, although many school districts are encouraging dual certification. Many observers are concerned that the new regulations will pose problems for school districts already facing financial difficulties (Malone, 2010).

Why is it important for young children to keep their home language AND learn English?

Research suggests that if children lose their home language, they may not become proficient in either their home language or English. Losing the home language means that preschool-age children may find communicating with family members difficult and feel less connected to their family traditions and heritage. This disconnect can lead to emotional and self-esteem difficulties as these children approach adolescence. Young DLLs can easily lose their first (or home) language while learning English, or lose the balance between the two languages, unless teachers and family members make an effort to make sure this does not happen (Castro et al., 2011; Puig, 2010).

For these reasons, maintaining the home language is important. But research also shows that low-income children who start kindergarten with no English language skills are not likely to catch up academically with either their bilingual or English-speaking classmates (Castro et al., 2011). Some studies also suggest that children who were not proficient in English at the beginning of kindergarten were unlikely to catch up (Hammer, 2009). Research also shows that the academic advantage goes to children who have an age-appropriate level of proficiency in both languages, called balanced bilingualism. This level of bilingual proficiency is associated with increased ability to reason by analogy, form concepts, and achieve good language skills. For all these reasons, encouraging dual language learning in preschoolers is important.

Although the research available now is of varying quality and sometimes contradictory, most studies show that there are negative consequences for failing to support dual language learning. The research also shows that there are positive academic advantages to being bilingual at an age-appropriate level. Compared to children who know only one language, or even to children who are “limited bilinguals” (for example, children who understand but do not have oral proficiency in a second language), research suggests that fully bilingual children have more efficient brain functioning and can have higher academic achievement. Research also supports the ideas that a strong home-language base makes it easier to learn English and that children can learn two languages as naturally as learning one (Castro et al., 2011).

Two research synthesis reports, both published in 2006, pulled together what was known at that time about different approaches to dual language learning. One report was prepared by the National Literacy Panel (NLP) (August & Shanahan, 2006) and the other report by the Center for Research on Education, Diversity, and Excellence (CREDE) (Genesee, Lindholm-Leary, Saunders, & Christian, 2006). For the NLP synthesis, 18 researchers reviewed over 3,000 studies (about 300 of these studies focused on children ages 3 to 18). Four researchers produced the CREDE report after examining approximately 200 articles and reports. Both syntheses concluded that (1) English language learners benefit from instruction that stresses the key components of reading in English (such as phonics) and (2) students find it easier to learn English if they have literacy and oral proficiency in their home languages.

Do research findings have any clear implications for preschool instructional strategies?

Goldenberg (2008) concludes that restricting the use of the child’s home language in the classroom is “simply not based on the best scientific evidence available… [and that such] policies make educators’ jobs more difficult” (Goldenberg, quoted in Severns, 2010). In other words, educating young DLLs means bringing together the connections among language, culture, and learning in an early childhood program (Office of Head Start, 2008).

These general recommendations have major implications for how administrators and staff in early care and education programs design and carry out effective services for DLLs. They also reinforce the need for more bilingual educators in preschool classrooms.

Linda Espinosa, a researcher who has looked at instructional practices for young DLLs, points out that most of the research done with DLLs has been conducted with Spanish speakers. She suggests that more detailed, longitudinal studies are necessary to determine appropriate and effective instructional strategies and curricula for all DLLs (Espinosa, 2010).

What does research suggest with regard to DLLs with, or at risk for, disabilities?

Two separate issues related to young DLLs with, or at risk for, disabilities need to be considered. The first concern is that young non-English speakers may be wrongly diagnosed as having a disability, particularly given the challenges of assessing their development and language learning. It is difficult for teachers to know, for example, if not interacting with and not talking to classmates, extreme shyness, not paying attention, or even tantrums are symptoms of behavioral problems or typical of young children learning English as a second language (Santos & Ostrosky, n.d.).

The second area of concern is adequately supporting DLLs who have disabilities. Often they face difficulties related not only to the disability but also to the widespread notion that these students can or should learn in only one language. All DLLs (including young children with disabilities, who may experience slower language development in both languages) should be given the opportunity to keep their home language while also learning English (Cheatham, Santos, & Ro, 2007). No scientific evidence supports the idea that being bilingual causes or leads to language delay, while there is evidence that children with special needs may be even more likely than other children to lose their home language and the benefits that come from being bilingual (Cheatham, Santos, & Ro, 2007; Division for Early Childhood, 2010).

What are the major challenges in working with DLLs in the preschool classroom?

Setting(s) for which the article is intended:
Intended audience(s):
Age Levels (the age of the children to whom the article applies):
Related Illinois Early Learning and Development Standards:
Revised: 2011
English title: Dual Language Learners
Search for additional IEL resources on: 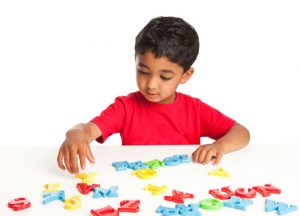