On Aug. 18, 2015, the New York Times printed a story called “Turn the Page, Spur the Brain.” It reported on recent findings that have led the American Academy of Pediatrics to recommend that parents begin reading to their children from birth. They cited a study from the journal Pediatrics that looked at images of children’s brains. They found more activity in the brain area that integrates sound and visual stimulation in children whose parents read often to them compared with children whose parents did not.

The authors suggest that when children are hearing stories read aloud and also are visualizing what they hear, that is imagining. They are using their imagination to “see” the story being told. Young children whose parents read to them frequently are developing connections in their brain between hearing and visualizing. This may help them later on when they begin to read words to imagine what those words mean.

Reading stories also introduces children to new words that go beyond their daily conversations. Books may have interesting words that describe actions, such as disappear or evaporate or disintegrate. Our conversations are more likely to use hide, melt, or fall apart. Books also have descriptive words we may not always use, such as humongous, fantastic, or incorrigible. Hearing words in stories that will appear in school books gives them an opportunity early on to imagine what they mean and form visual images. It gives parents a chance to match everyday words with “unique” words.

What happens when we give our children videos of a story? Dr. Hutton, the main researcher for the study in Pediatrics, asks, “When we show them a video of a story, do we short circuit that process a little? Are we taking that job away from them? They’re not having to imagine the story; it’s just being fed to them.” He also says, “I think that we’ve learned that early reading is more than just a nice thing to do with kids. It really does have a very important role to play in building brain networks that will serve children long-term as they transition from verbal to reading.”

Why start in early childhood? We know that children whose parents read aloud to them early and often tend to have and use more words and be better prepared to start school. Now we also know from research on children’s brains that children who have been read to often show differences in brain activity compared with other children. Reading stories aloud is a wonderful activity for parents to share with their children—it’s a way to spend quality time together, to connect physically, cognitively, and socially. So establish a daily (or nightly) ritual of reading to your child and build memories of favorite books as well as spur the brain.

Dr. Susan Fowler, professor of special education at the University of Illinois, will take one of our popular Tip Sheets and provide specific suggestions that benefit children with developmental delays or disabilities. Most of our Tip Sheets work for all families, but some can use “tweaking” or additional tips to support children with disabilities.
(Biography current as of 2017) 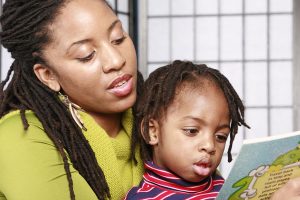