I believe teacher’s professional development mirrors project work. My goal as a director is to set the stage for learning.

Our catalytic event was our National Association for the Education of Young Children accreditation renewal. As I prepared both the program portfolio and the infant/toddler portfolio, I collected what I believed to be our areas of strength and areas of challenge. It struck me that we needed to not only strengthen our anti-bias curriculum goals but also make anti-bias a component of our philosophy and our everyday way of being. Consequently, I decided to lead our teachers in a series of discussions around this topic.

I began by asking the teachers which of the NAEYC criteria in the accreditation portfolio were most difficult to meet. Just as I expected, anti-bias curriculum was an area of concern. The consensus among the teachers was that they were able to do it, but there was not the depth in the work they would like to see. During this discussion, I sensed a strong interest in building our program by learning, discussing, applying, and reflecting more on an anti-bias curriculum. I could also hear the teachers’ motivation to be well versed in not only practice but also current information and research in the early childhood field.

Based on information gathered from other early childhood professionals, I ordered four books:

When the books arrived, I set up a display of all four books with reviews and copies of each index. I encouraged the staff to take a look and let me know which of the four they felt would be most helpful in our anti-bias journey. The teachers decided on Anti-bias Education for Young Children and Ourselves.

Our first read was actually NAEYC’s 2009 position statement, Where We Stand on Responding to Linguistic and Cultural Diversity. We typically read prior to our meetings, discuss what we have read, and then brainstorm how we will apply what we have discussed in the classroom with children. The teachers felt they were actually doing very well with regard to the NAEYC position statement. This was interesting because when the journey began, they felt that they had a lot to learn. I was a bit perplexed, but I didn’t challenge any comments. Instead, I took anecdotal notes to reflect on and develop a better understanding of what they believed they already knew and were doing well.

After reading the first chapter in Anti-bias Education for Young Children and Ourselves, I decided it would be a good idea to establish a baseline of knowledge and perception by ranking ourselves on the four anti-bias goals.

On a scale of 1 to 10 with 10 being a solid practice of anti-bias work, the group gave itself an 8. Consequently, I had an established a baseline of knowledge. Or did I?

As we moved to the book’s second chapter, teachers began offering more resources, such as the magazine Teaching Tolerance, YouTube videos, and websites. I began reading James Banks’s work, most importantly Cultural Diversity and Education: Foundations Curriculum and Teaching.

There is a lingering question that is still not answered: Do we point out differences in the safety of our classrooms so we can discuss them in a positive manner, or do we wait for children to ask questions or make comments?

Chapter 4, “Creating an Anti-bias Learning Community,” was a very reflective chapter for all of us. This work required each of us to take a long, hard look at who we are as teachers and how we influence children every day. At this point I sensed and eventually heard a level of discomfort from my teachers. We were discussing the phases of adult anti-bias development, and I had asked each teacher to take inventory and come to an understanding of where he/she was along the developmental continuum.

One teacher wrote: “I feel that I am just beginning to face the issues. I wondered at the beginning if this was really necessary—especially at the preschool level—and to be honest, I thought it was silly. But as we are getting deeper in and as I read more and begin to understand all the complexities and ramifications of not talking about it, I understand the need to learn more, to talk about it, and use what we learn, especially at the preschool level.”

Another teacher said: “I was comfortable with what I thought was the children’s blindness and now realize it was my own fear of how to handle differences that made me believe children did not see differences in others.”

We are not even halfway through our work and I can sense and see evidence of a shifting in our approach. We are learning, and as we learn we are developing our knowledge, skills, and dispositions. Certainly this learning has a huge emotional component for all of us.

I wonder: What will be our culminating event? Will it be an updated philosophy, including a statement on anti-bias curriculum? Will there be a new norm throughout the program where anti-bias curriculum is a given? Who knows, but I am excited to move forward through this project! 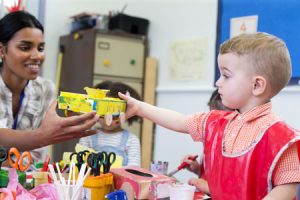