Skip to content
Blogs Perspectives on the Project Approach
10/14/201209/23/2019 dfuoss Blogs by practicing early childhood directors
About this resource Reviewed: 2012

The Early Childhood Developmental Enrichment Center (ECDEC) Preschool for All program is one of the original ISBE-funded preschool grants. The program enrolls just under 1,200 preschool children in six elementary school districts in northwest Cook County. Almost all children attending ECDEC are from families living in isolated neighborhoods of high density, multifamily dwellings. Most have a home language other than English; last year, more than 40 languages were spoken by the ECDEC population. Most of the children live in poverty, and their families face a wide range of challenges, such as single parenting, unemployment, and lack of education or training.

ECDEC program staff has always been very committed to serving English-language learners. In the 1980s, most of these students were Asian children who arrived on short-term relocation as their parents looked for work in the technology area. Demographics shifted quickly, and during the 2011–2012 school year, ECDEC enrolled children with 42 different home languages. While Spanish is the dominant language, some teachers had as many as 14 different languages spoken in their classrooms. A very high percentage of children also live in poverty, and many parents have low levels of education with high rates of unemployment.

The Project Approach has supported ECDEC teachers as they create young communities of learners. With solid training in curriculum and authentic portfolio assessment, the teachers and their teams are excited when children demonstrate inquisitiveness that can lead to new project ideas. Asking children directly about their experiences with and knowledge of the project topic taps into their many cultural experiences. Family engagement is a high priority for ECDEC programs, and gathering information from parents during the project also helps them become more active in their children’s learning. For several projects (including fishing and arts), the parents have been the experts for the class, which allowed children to view parents in another role! Staff members who speak the various languages are always included in the projects, and we encourage families to add words in their native language to the project webs and related materials. The staff members have created family surveys in multiple languages, and the surveys children use to interview family members, neighbors, and friends at home always reflect the different languages spoken in the classrooms.

One ECDEC site recently did a project on pets. This was a topic of great curiosity for the children because many are apartment residents who haven’t had pets. They had some knowledge of animals but were also curious about ownership of pets and the many kinds of animals that families might consider to be “pets.” Our children reside in densely populated areas, but some of their families originated in primarily rural countries. The very diverse parent community also was excited to share information with the children about pets and animals that were familiar to them in their native countries. Many parents talked about their experiences as well as those of their children’s grandparents. This sharing of information expanded children’s language skills, promoted cognitive development, and provided opportunities to learn about cultural differences. Before the project began, the teachers likely thought of “pets” as fish, cats, and dogs, but family involvement helped broaden the idea of what a pet is.

A local veterinarian was enthusiastic when the teacher asked her to be a resource for the project. The classes were invited to come and spend a large block of time at her office. Teachers had the children prepare for the visits to maximize the field trip time. Students planned for the visit by talking about what they already knew about vets and coming up with questions about being a vet and operating a veterinary practice. The vet gave a tour of her facility and answered the students’ initial questions, which they had brought on their “clipboards.” Children then asked follow-up questions and eagerly listened to her explanations. They also looked at the instruments and other artifacts in her office. Medical equipment and animal X-rays, including one of a pregnant dog, were very informative. The veterinarian allowed the children to stay for an extended time to see the different areas of the office (including surgery) as well as the pet boarding area.

When the children returned to school, a quick vote was taken, and they decided to convert the classroom into a veterinarian’s office. Artifacts, books, pictures, and student work filled the classroom, and parents loaned or donated related materials. While language was a core focus, math and science became equally strong as children pretended to be owners, veterinarians, office managers (and “appointment makers”), and even pets who needed attention and had “medical concerns” to be investigated and explored. Over a period of several weeks, the teachers could see evidence that all Illinois early learning standards were being addressed. The teachers found that authentic assessment was easy to accomplish as children participated in the many flexible learning activities.

This is just a single example of an ECDEC classroom project. We have seen multiple projects that have brought together children, families, and community members. As always, the interest and excitement of children learning through the in-depth investigation has resulted in stronger growth in all areas of the curriculum, which is the goal everyone at the ECDEC embraces. 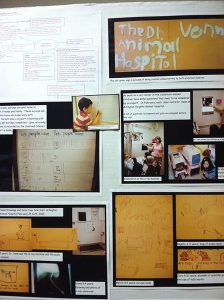