University Primary School is affiliated with the College of Education at the University of Illinois at Urbana-Champaign and serves children from preschool through third grade in three multiage classrooms (prekindergarten, kindergarten and first grade, and second and third grade). A semester-long project investigating “How Things Work” revealed varied interests across all three classrooms. We viewed the topic through the lenses of technology and engineering, keeping potential subtopics open-ended so the children’s interests could emerge. The project stretched our staff and students in remarkable ways. We delved into the meaning of “technology,” avoiding the tendency to link the term exclusively to electronics, and we connected with unusual resources within our families and the community. The project culminated in a five-day public exhibit held at our university’s art museum where the story of “How Things Work” was told through intricate representations, both large and small.

The choice of this project topic felt a little risky. Our staff decided on the broad topic through consensus after much debate and listening to students’ questions about different items in their classroom and their lives: “What’s inside of there?” “Who made that?” “How do you make that?” We recognized that the ability to make something is a powerful aspect of the individual’s sense of self and that the disposition to create technologies in response to needs in our lives is essential to our humanity. Our hunch was that this “big” topic would honor the diverse interests and abilities of these particular students and teachers, but we began the project with very little preconception of what the students might wish to investigate.

From my perspective, this project definitely felt like (and in essence was) 10 smaller projects at once! During class discussions, children and teachers connected ideas from one study group to another in ways that were sometimes anticipated and sometimes unexpected. This led to a great deal of discussion among the teachers. We found that the questions the children posed were ones that many teachers and parents also asked as adults. Exploration and experimentation were abundant.

I’ll highlight the work of the movie study group in the K-1 classroom. I was uncertain about this subtopic at first. Was the teaching team sure they could handle a movie study group? It seemed a little “unconventional” for a project. The staff said that the students already had their parents’ phones in hand to capture their world by video and they had many questions: Why are movies made? How does the picture get inside the screen? How do the actors pretend? How might they make an actual movie?

Both of the big, mainstream movie theaters in town were under construction, so the group went to our older local theater as a starting point. Students toured projectors old and new and looked at the many other items in a theater. They went behind the big screen and discovered that the light doesn’t pass through to the other side. After this field experience, the students generated more questions. They then visited the university theater department and a local sound company. They talked with experts about makeup, costuming, and scenery. Amid all of this, our community’s film society launched a children’s film event called From Pens to Lens.School children were invited to submit scripts, and a film production crew would select one to be made into a movie that would be shown on the “big screen.” The children wrote and submitted a script to the event but also wanted to make a movie for our school-size screen.

With a month left in our semester, participating students prepared to make their movie using hand-held cameras, homemade costuming, local scenery, and a host of parent drivers. After much decision-making and teamwork, filming day arrived and the sun was shining! Thanks to a collaboration with the university’s performing arts center, the young actors were able to start their day applying makeup and dressing up in their homemade costumes in the lighted dressing rooms. From there, the experience went pretty much as one might expect from a group of eight kindergarten/first graders making a movie with one teacher! The children’s finished movie was a delight; they truly “made” a movie, discovering and understanding many processes and technologies along the journey.

We were all pleased when the children’s script (titled Susan and Daisy’s Adventure: Episode 1) was chosen for the Pens to Lens festival along with 10 others. The local film company that produced a version of the film kept the script verbatim. The children were able to attend the premiere of the 10 films at the local art house theater they had visited on their first field trip. The red carpet was rolled out, the popcorn was in hand, the lights went down, and the cheering was enthusiastic. The representation and the “reality” met up within one week: the children shared their homemade movie at school and viewed the professionally made movie based on their script at the festival. It was quite an investigation—one the students, teachers, and families will never forget!

The experience exemplifies those wonderful ways that project work often “comes full circle.” For me, what worked best in the “How Things Work” project was the Project Approach itself! I am not sure we would have been open to this investigation of movies without the broad overarching topic. I am glad that as a staff we experimented and ventured into the unknown. It was indeed an “adventure: episode 1”!

This fall, the staff will return to pursuing a more “contained” topic, but for this past spring, the “How Things Work” project was exactly what we needed.

Setting(s) for which the article is intended:
Intended audience(s):
Age Levels (the age of the children to whom the article applies):
Related Illinois Early Learning and Development Standards:
Revised: 2013
English title: A Multiage Project on “How Things Work”: An Unexpected Adventure
Search for additional IEL resources on: 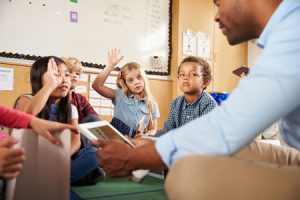