Most preschool and kindergarten classes include regular whole group meetings. Often called circle or group time, these meetings may include listening to stories, singing, fingerplays, and other teacher-led activities. Group meetings are also good times to encourage children to talk directly to each other about what matters to them. Child-to-child conversations during group meetings can help meet several Illinois Early Learning and Development Benchmarks (1.A.ECc, 1.B.ECb, 1.B.ECd, 31.A.ECb).

At the beginning of the week, have children “check in” with each other during the group meeting.

Make group meeting a time to explore differences of opinion.

Have children ask for and give information during group meetings. 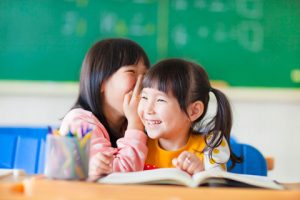