Everyone tries to prepare soon-to-be parents for the day they bring life into the world, but no one can truly explain the array of emotions felt when it actually happens. The moment I saw each of my children’s faces for the first time, I was awestruck and instantly fell in love with them. I felt incredibly blessed to be the mother of this little human being. I felt overjoyed for many reasons. Before delivering my first child, Reed, I had experienced two miscarriages. After experiencing such grief and pain after losing two pregnancies, once I could see past the reluctance to trust this pregnancy, I bonded deeply with Reed as he kicked and moved inside my stomach. The emotions overwhelmed me.

Yet the day after I delivered Reed a nurse checked on us and asked me if I knew that he was tongue tied. I not only did not know that my baby was tongue tied, I did not even know what that meant. I was quickly told that this was a hereditary condition that restricts the range of motion of the infant’s tongue. Despite the guidance and efforts of our pediatrician and the breast-feeding consultants at Christie Clinic, the tongue tie ultimately affected Reed’s weight gain. This made a procedure to snip the frenulum, which was restricting the motion of his tongue, necessary.

Before the procedure, Reed had developed inefficient sucking techniques and had to relearn how to correctly use his tongue and mouth muscles to efficiently suck and eat. After the procedure was complete, we worked with an infant speech therapist to retrain the muscles in his mouth that would allow Reed to suck properly and eat as he transitioned to solid foods during his first year of life. Around 13 months old, my son experienced many ear infections, in addition to having allergies and snoring at night. Our pediatrician referred us to an ear, nose, and throat (ENT) specialist.

The ENT discovered that Reed had a 50% hearing loss and enlarged adenoids. They recommended removing his adenoids and placing pressure equalizer (PE) tubes in his ear drums. Once this was complete, Reed was able to hear properly, his allergy flare-ups decreased, and he slept without snoring.

While in preschool, Reed completed a speech screening through our local school. While he was able to hear words correctly, because of his history of ear infections and the tongue tie correction, he had trouble blending certain sounds. As a result, he was enrolled in itinerant speech services twice a week. Reed worked very hard with his speech therapist each week and eventually learned how to blend sound combinations that he previously had not been able to blend. He went on to graduate from his itinerant speech services and entered kindergarten.

While in kindergarten I communicated frequently with his teacher and followed his progress. The teacher was very open to talking with me and was willing to do what was best for Reed’s development of preliteracy skills and independent reading. During this year, Reed was placed in a reading group at school with a reading support specialist. Because of his history, he lacked confidence when he struggled to learn new words and to read books. The school used both pull-out and push-in reading instruction models to give extra support in individual and group settings. Reed is now in the second grade and reads and spells with confidence and success!

As I look back on Reed’s journey, it is evident that advocacy and communication was required at each step along the way. I worked with professionals ranging from hospital staff to teachers and speech therapists. The need for rounded supports that wrap services around the child is imperative. Advocacy for the child by at least one adult or caregiver is also essential to ensure the child receives what is best for them.

Without my persistence and advocacy for my son, along with countless hours reading and completing activities at home together, he could have fallen through the cracks at any given point within his story. However, through advocacy and requests for assistance from others, Reed is thriving developmentally!

Misty Krippel is a parent educator through the Urbana School District with the CU Early Program. Misty received her master’s degree in early childhood special education from the University of Illinois. Her focus is with birth to three prevention initiative services through the Illinois State Board of Education. Misty partners with families, including pregnant and parenting teens, focusing on prenatal health and child development.
Biography current as of 11/2018 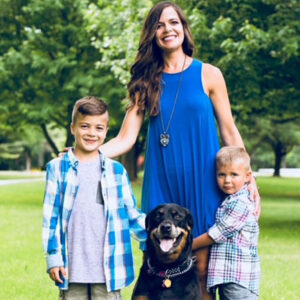