Many preschoolers like to play with things that roll. Rolling activities can be opportunities to explore principles of science and engineering. Children can investigate rolling objects on inclines such as sliding boards, ramps, chutes, and hillsides at a playground or park. The following activities can help address Illinois Early Learning and Development Benchmarks 11.A.ECc, 11.A.ECd, 11.A.ECg, 12.D.ECa, and 12.D.ECb.

Talk with children about their rolling activities.

Setting(s) for which the article is intended:
Intended audience(s):
Age Levels (the age of the children to whom the article applies):
Related Illinois Early Learning and Development Standards:
Revised: 2013
English title: Playground Physics: On a Roll!
Search for additional IEL resources on:

Playground Physics: On a Roll! 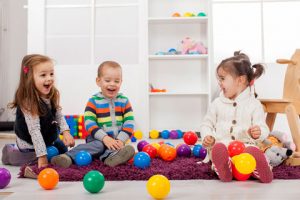